skip to main | skip to sidebar

Dr. Dave Wang's article on James Madison's request of Thomas Jefferson to buy books on China for him. Jefferson was in Paris and served as the ambassodor of the United States. This showed that Europe as a cultural bridge between China and the United States. 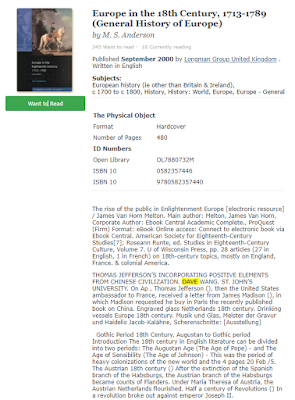 Posted by smallwave at 2:31 PM No comments:

Dr. Dave Wang's article on the influence of Confucian moral philosophy on the United States was cited by Professor Bin Song from Washington College in 2020. In his article "Is Confucius beneath or Beyond Ethics and Politics", published in the Journal of World Philosophies, Dr. Song cited the article. Clearly, more and more scholars have realized the historical fact that Confucian moral thoughts had great impact on the new nation when its founders unfolded the blueprint for feldgling United States.

Posted by smallwave at 4:50 PM No comments:

Recently I have found that George Washington University, joined other universities, used Dr. Dave Wang's papers as teaching texts. Below I will show you the six universities, including George Washington University, City College of San Francisco, Montana State University, Bozeman, Johns Hopkins University, The Hong Kong University of Science and Technology and University of California, San Diego. The following papers are used as teaching text, The US Founders and China: The Origins of Chinese Cultural Influence on the United States, in Education About Asia, 16, Fall, 2011; Chinese Civilization and the United States, Teah Ginseng, Porcelain Wars and Silk in Colonial America, Virginia Review of Asian Studies; Thomas Jefferson's Incooporating Positive Elements from Chinese Civilization, Virginia Review of Asian Studies; and How China Helped to Shape American Culture: The Founding Fathers and Chinese Civilization, Virginia Review of Asian Studies. 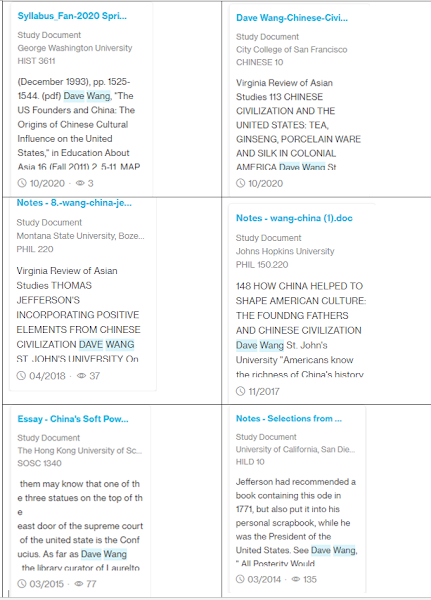 Posted by smallwave at 2:48 PM No comments:

China’s rise in a liberal world order in transition, published in Review of International Political Economy cites Dr. Dave Wang's academic paper, Confucius in the American founding: The founders’ efforts to use Confucian moral philosophy in their endeavor to create new virtue for the nation. Virginia Review of Asian Studies, 16, 11–26. You can find it from[Google Scholar] The three authors of this article are well-known experts. The first author, Dr. Nana de Graaff is Associate Professor in International Relations at the Department of Political Science and Public Administration. She is Director of Studies for the BSc and MSc Political Science at this department and Programme director of the Graduate School of Social Sciences at the Vrije Universiteit Amsterdam. De Graaff is Chair of the EU COST Action 18215 China in Europe Research Network; Executive Council Member of SASE (Society for the Advancement of Socio-Economics) and International Advisory Board member of International Affairs (Oxford University Press/Chatham House). She was a Honorary Fellow (2016-2017), at the Department of International Politics, City University of London and is boardmember of the Dutch Political Science Association (NKWP, Nederlandse Kring voor de Wetenschap der Politiek) since 2015. The second author, Dr. Tobias ten Brink, is Professor of Chinese Economy and Society. He also serves as Director, China Global Center at Jacobs University, Social Sciences & Humanities. The third is Professor Inderjeet Parmar. Dr. Parmar read Sociology at the London School of Economics, and Political Sociology at the University of London. His doctorate, from the University of Manchester, was in the fields of political science and international relations. Prior to appointment at City, University of London in 2012, he taught at the University of Manchester (1991-2012), mainly in its Department of Government which, between 2006-09, he served as Head of Department. 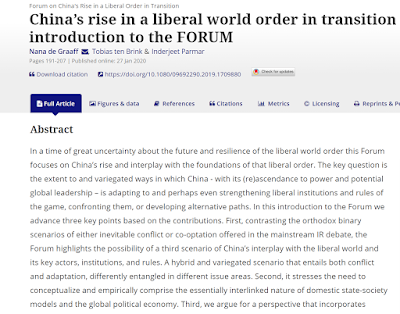 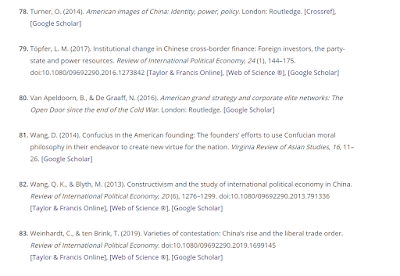 Posted by smallwave at 6:56 PM No comments:

On the list that the universities and colleges which have adopted Dr. Dave Wang' academic papers as teaching text has added another university, which is City College of San Franciso, has adopted Dr. Dave Wang's academic paper as teaching text in its history class. This paper, Chinese Civilization and the United States: Tea, Ginseng, Porcelain Ware and Silk in Colonial America, published in Virginia Review of Asian Studies in 2011. 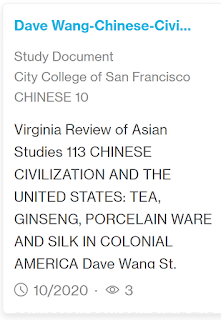 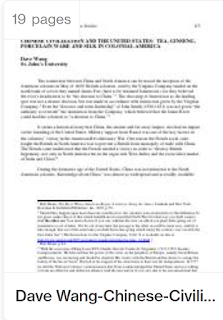 Posted by smallwave at 7:46 PM No comments:

The below is what I came across on the website: It was when the newborn US was in such a critical time that American trade with China was opened. We all know that looking back at the history may be of some help to understand current US-China economic ties, though the situation today is tremendously different from previously. We will benefit from the founding father's wisdom. (Dr. Dave) Wang’s Paper With China We trade shows you how the founding father led the new nation rise above the economic quagmire. Saturday, February 28, Relics of the China Trade. High atop a wooded hill in Milton, overlooking the clusters of sailing ships out in Massachusetts Bay, Capt. Robert Bennet Forbes in built a handsome, spacious Greek Revival mansion. He filled the house with the porcelain, paintings, furniture, silver, lacquerware, and silks he had collected during decades of journeys to China, beginning when he was 13 years old. More information following this link from New York Times. Friday, February 20, Dave Wang has again made significant progress in his exploration of the connection between the founding fathers of USA and Chinese Civilization. It is available through this link. Thursday, February 19, The Trade Show for Liberty…. Friday, February 13, Benjamin Franklin and the Great Wall of China. The Great Wall of China was built 2, 000 years ago by the Qin dynasty, as a sturdy "No Trespassing" sign to neighboring kingdoms. For centuries, however, the wall remained neglected and forgotten, until Europeans in the 18th-century became infatuated with it. More information is available through this link. More information on this event calendar. Benjamin Franklin in China. February 9, Dave Wang will talk George Washington and the China Trade in Salem According to his findings, Washington supported the United States trade with China in its inception in , when he recommended the competent business manager for the Empress of China, the first American commercial ship owned and outfitted by the revolutionary veterans in an attempt to bring the fledgling United States to enter international commerce. Sunday, February 1, Tea in colonial America E. Art and Society of the New Republic, G. The Arts and Crafts Movement in America. George Washington's China. George Washington loved Chinese porcelain. I here collect online information concerning his Chinese porcelain wares. George and Martha Washington's China B. This revised edition of a book first published in is still the only work that goes to fresh, primary shipping sources to tell the story of America's trade in export Chinese porcelain. There are over one hundred photographs in the book covering all the major types of export porcelain both common and uncommon, made for America. George Washington's antiques at Mount Vernon G. Chinese Canton Porcelain. Sunday, January 25, Thomas Jefferson and Chinese Flowers. Friday, January 16, Thomas Jefferson's Collection of Books on China. Jefferson had an excessively big library. He collected some books about China. If you search by key word ASIA, you will find six books. However, for Thomas Jefferson, one of the most important books about Chinese culture is this book, Designs of Chinese buildings, furniture, dresses, machines, and utensils by Sir William Chambers you could find it through this link. Saturday, January 3, Chinese Art in the Northern American Colonies. Chinese Hand scrolls C. Chinese Paintings D.
Posted by smallwave at 4:09 PM No comments:

I would like to show the following snapshot to my readers. The very prestigious academic and educational journal Education About Asia has put Dr. Dave Wang's article US Founders and China on the Editor list. This is a great honor. There is only one article that is selected by the editor each year. There are two items on the snapshot. The first one is the news of the editor list and the second is that Dr. Dave Wang's article is selected by schools in New York as teaching materials. You can get his article from this link.

Posted by smallwave at 8:43 PM No comments:

smallwave
New York City, New York State, United States
Born and raised in Northeast China, I earned my MA and Ph.D in the United States. I have many hobbies, such as reading, traveling, making friends and drinking wine. I could boast that I have friends all over the world and tasted many wines from various countries. This blog will show you that I have another hobby which is to explore the cultural influence of traditional Chinese civilization on colonial North America and the United States. You can contact me through davewangnyer@gmail.com